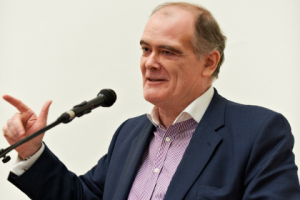 What Bruce does now

I write, broadcast and speak on a wide range of subjects including religion and geopolitics, the history of southeastern Europe and the story of textiles. I am the online religion editor of The Economist, and I often contribute to other publications. I serve on the committee of the Maghera Historical Society and   I have a strong interest in the local history of my corner of Northern Ireland, especially its linen heritage and its early American connections. I have been an active participant in global debates organised by the Ecumenical Patriarch on the subject of faith and the environment. The early Christian history of Ireland and Scotland is another strong personal interest.

What Bruce did before

Since 1998 I have worked mainly for The Economist, covering everything from conflict in the Balkans to transatlantic relations and comparative religion. Between 2002 and early 2004 I took a sabbatical to research the history of forced migration between Greece and Turkey. In 2006, I launched the international pages of The Economist’s foreign news section, a new editorial feature devoted to broad global topics from disarmament to development.

Before joining The Economist, I served as diplomatic correspondent for the Financial Times, working in London, Brussels and then Washington DC. From 1990-1993, I was a correspondent for The Times in Moscow, covering the fall of communism and Russia’s post-Soviet transition. In an earlier stint at the Financial Times, I was editor of the European news section.  My first jobs as a journalist were with Reuters, as a junior correspondent in Paris and as the agency’s main correspondent in Athens. Thanks to these jobs, I have a good working knowledge of French, modern Greek and Russian and I can get along in Italian, Dutch, German and Spanish.

At Saint John’s College, Cambridge, I studied Philosophy and then Social and Political Sciences, graduating with a BA in 1979. Before that I was educated at Maghera Primary School, Brook House School in Dublin and Shrewsbury School.

I have written two books: